ITHACA, N.Y. — Most nursing homes had fewer nurses and caretaking staff than they had reported to the government for years, according to new federal data, bolstering the long-held suspicions of many families that staffing levels were often inadequate.

The records for the first time reveal frequent and significant fluctuations in day-to-day staffing, with particularly large shortfalls on weekends. On the worst staffed days at an average facility, the new data show, on-duty personnel cared for nearly twice as many residents as they did when the staffing roster was fullest.

The data, analyzed by Kaiser Health News, come from daily payroll records Medicare only recently began gathering and publishing from more than 14,000 nursing homes, as required by the Affordable Care Act of 2010. Medicare previously had been rating each facility’s staffing levels based on the homes’ own unverified reports, making it possible to game the system.

The payroll records provide the strongest evidence that over the last decade, the government’s five-star rating system for nursing homes often exaggerated staffing levels and rarely identified the periods of thin staffing that were common. Medicare is now relying on the new data to evaluate staffing, but the revamped star ratings still mask the erratic levels of people working from day to day. 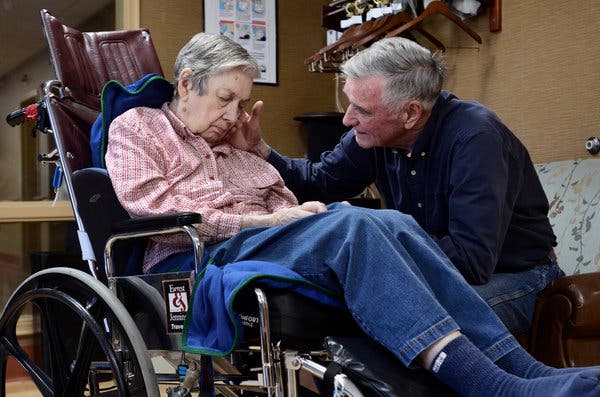 At the Beechtree Center for Rehabilitation & Nursing here, Jay Vandemark, 47, who had a stroke last year, said he often roams the halls looking for an aide not already swamped with work when he needs help putting on his shirt.

Especially on weekends, he said, “It’s almost like a ghost town.”

Nearly 1.4 million people are cared for in skilled nursing facilities in the United States. When nursing homes are short of staff, nurses and aides scramble to deliver meals, ferry bedbound residents to the bathroom and answer calls for pain medication. Essential medical tasks such as repositioning a patient to avert bedsores can be overlooked when workers are overburdened, sometimes leading to avoidable hospitalizations.

“Volatility means there are gaps in care,” said David Stevenson, an associate professor of health policy at Vanderbilt University School of Medicine in Nashville, Tenn. “It’s not like the day-to-day life of nursing home residents and their needs vary substantially on a weekend and a weekday. They need to get dressed, to bathe and to eat every single day.”

David Gifford, a senior vice president at the American Health Care Association, a nursing home trade group, disagreed, saying there are legitimate reasons staffing varies. On weekends, for instance, there are fewer activities for residents and more family members around, he said.

“While staffing is important, what really matters is what the overall outcomes are,” he said.

While Medicare does not set a minimum resident-to-staff ratio, it does require the presence of a registered nurse for eight hours a day and a licensed nurse at all times.

The payroll records show that even facilities that Medicare rated positively for staffing levels on its Nursing Home Compare website, including Beechtree, were short nurses and aides on some days. On its best staffed days, Beechtree had one aide for every eight residents, while on its lowest staffed days, there was only one aide for 18 residents. Nursing levels also varied.

The Centers for Medicare & Medicaid Services, the federal agency that oversees nursing home inspections, said in a statement that it “is concerned and taking steps to address fluctuations in staffing levels” that have emerged from the new data. This month, it said it would lower ratings for nursing homes that had gone seven or more days without a registered nurse.

Beechtree’s payroll records showed similar staffing levels to those it had reported before. David Camerota, chief operating officer of Upstate Services Group, the for-profit chain that owns Beechtree, said in a statement that the facility has enough nurses and aides to properly care for its 120 residents. But, he said, like other nursing homes, Beechtree is in “a constant battle” to recruit and retain employees even as it has increased pay to be more competitive.

Mr. Camerota wrote that weekend staffing is a special challenge as employees are guaranteed every other weekend off. “This impacts our ability to have as many staff as we would really like to have,” he wrote.

In April, the government started using daily payroll reports to calculate average staffing ratings, replacing the old method, which relied on homes to report staffing for the two weeks before an inspection. The homes sometimes anticipated when an inspection would happen and could staff up before it.

The new records show that on at least one day during the last three months of 2017 — the most recent period for which data were available — a quarter of facilities reported no registered nurses at work.

The Centers for Medicare & Medicaid Services discouraged comparison of staffing under the two methods and said no one should expect them to “exactly match.” The agency said the methods measure different time periods and have different criteria for how to record hours that nurses worked. The nursing home industry also objected, with Mr. Gifford saying it was like comparing Fahrenheit and Celsius temperatures.

But several prominent researchers said the contrast was not only fair but also warranted, since Medicare is using the new data for the same purpose as the old: to rate nursing homes on its website. “It’s a worthwhile comparison,” said David Grabowski, a professor of health care policy at Harvard Medical School.

Of the more than 14,000 nursing homes submitting payroll records, seven in 10 had lower staffing using the new method, with a 12 percent average decrease, the data show. And as numerous studies have found, homes with lower staffing tended to have more health code violations — another crucial measure of quality.

Even with more reliable data, Medicare’s five-star rating system still has shortcomings. Medicare still assigns stars by comparing a home to other facilities, essentially grading on a curve. As a result, many homes have kept their rating even though their payroll records showed lower staffing than before. Also, Medicare did not rate more than 1,000 facilities, either because of data anomalies or because they were too new to have a staffing history.

There is no consensus on optimal staffing levels. Medicare has rebuffed requests to set specific minimums, declaring in 2016 that it preferred that facilities “make thoughtful, informed staffing plans” based on the needs of residents.

Still, since 2014, health inspectors have cited one of every eight nursing homes for having too few nurses, federal records show. 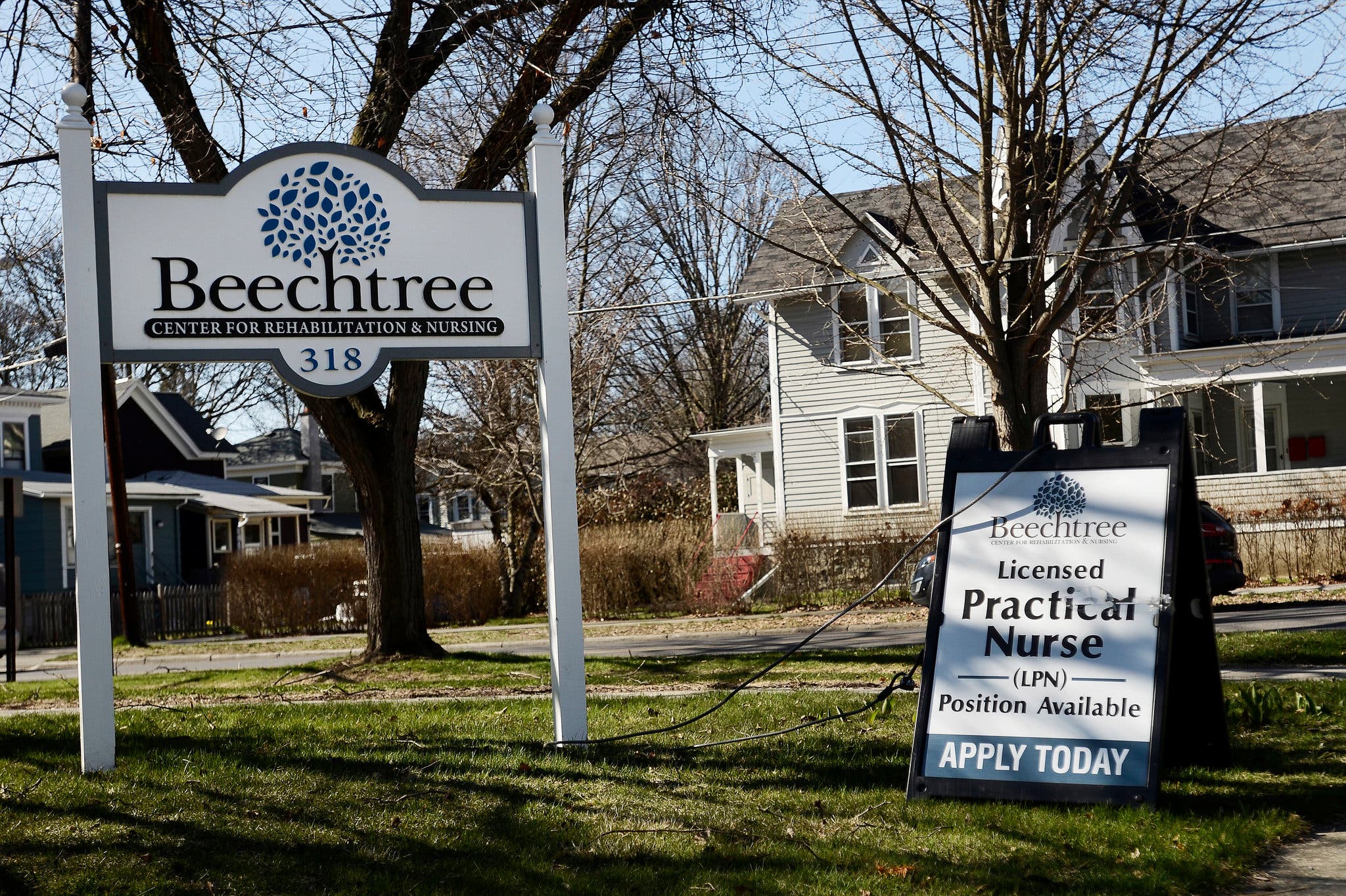 Payroll records at Beechtree show that on its highest staffed days, it had one aide for every eight residents, but there was only one aide for 18 residents at the lowest staffing level.CreditHeather Ainsworth for The New York Times

“They get burned out and they quit,” said Adam Chandler, whose mother lived at Beachtree until her death earlier this year. “It’s been constant turmoil, and it never ends.”

Medicare’s payroll records for the nursing homes showed that there were, on average, 11 percent fewer nurses providing direct care on weekends and 8 percent fewer aides. Staffing levels fluctuated substantially during the week as well, when an aide at a typical home might have to care for as few as nine residents or as many as 14.

Beechtree actually gets its best Medicare rating in the category of staffing, with four stars. (Its inspection citations and the frequency of declines in residents’ health dragged its overall star rating down to two of five.)

To Stan Hugo, a retired math teacher whose wife, Donna, 80, lives at Beechtree, staffing levels have long seemed inadequate. In 2017, he and a handful of other residents and family members became so dissatisfied that they formed a council to scrutinize the home’s operation. Medicare requires nursing home administrators to listen to such councils’ grievances and recommendations.

Sandy Ferreira, who makes health care decisions for Effie Hamilton, a blind resident, said Ms. Hamilton broke her arm falling out of bed and has been hospitalized for dehydration and septic shock.

“Almost every problem we’ve had on the floor is one that could have been alleviated with enough and well-trained staff,” Mrs. Ferreira said.

Beechtree declined to discuss individual residents, but said it had investigated these complaints and did not find inadequate staffing on those days. Mr. Camerota also said that Medicare does not count assistants it hires to handle the simplest duties like making beds.

In recent months, Mr. Camerota said, Beechtree “has made major strides in listening to and addressing concerns related to staffing at the facility.”

Mr. Hugo agreed that Beechtree has increased daytime staffing during the week under the prodding of his council. On nights and weekends, he said, it still remained too low.

His wife has Alzheimer’s, uses a wheelchair and no longer talks. She enjoys music, and Mr. Hugo placed earphones on her head so she could listen to her favorite singers as he spoon-fed her lunch in the dining room on a recent Sunday.

As he does each day he visits, he counted each nursing assistant he saw tending residents, took a photograph of the official staffing log in the lobby and compared it to what he had observed. While he fed his wife, he noted two aides for the 40 residents on the floor — half what Medicare says is average at Beechtree.

“Weekends are terrible,” he said. While he’s regularly there overseeing his wife’s care, he wondered: “What about all these other residents? They don’t have people who come in.”

A version of this article appears in print on July 8, 2018, on Page A1 of the New York edition with the headline: Nursing Homes Routinely Mask Low Staff Levels. Order Reprints | Today’s Paper | Subscribe