Having a conversation about moving — whether it’s with a relative,
even a spouse — brings up lots of anxiety. Here’s how to go about it.

Dawn and John Strumsky agree about most things, a tendency that has served them well in 45 years of marriage. But there was one subject where they did not see eye to eye for the longest time: their retirement future.

Ms. Strumsky wanted desperately to move into a retirement community, to live as “a princess” unburdened by the cooking, cleaning or yardwork required at their Maryland home. Mr. Strumsky didn’t just resist the idea, he detested it. During one argument with his wife, he shouted, “By God, I’ll sit in the burned-out, firebombed ruins of this home before anybody pulls me out!”

Mr. Strumsky, 78, tells that story with a laugh. Because, as he puts it, “I’ve done a 180 on this.” He finally gave in to his wife’s wishes, and in 2011 they moved to Charlestown, a retirement community outside Baltimore. Today, it might have no bigger fan than John Strumsky. One measure of his devotion: He’s the author of an exhaustive, 364-page history of Charlestown that management hands out to prospective residents.

His reluctance to move into a retirement community was not unusual. People often vow they’ll never do it, for any number of reasons. They fear giving up their independence. They can’t bear leaving their home. They don’t like confronting their own mortality. This can lead to bitter squabbles with members of their family and other loved ones who want them to move.

“I’ve heard more than one adult child say, half-jokingly, ‘If Mom doesn’t check in to a retirement home, I’m going to need to,’” said Katherine Pearson, a specialist in elder law and a professor at Pennsylvania State University’s Dickinson Law School.

So how do you persuade an unwilling senior to at least consider it? The key is to be patient, said Tom Neubauer, executive vice president at Erickson Living, which operates 19 retirement communities. “Inherently there’s a sense of denial, particularly as it relates to aging, and you’re trying to defeat that.”

He likened the process to helping a high school student choose a college: “You can’t just hand them a brochure and say, ‘This is where you’re going.’ It’s a journey.”

Mr. Neubauer’s mother, Betty, moved into a retirement home three years ago. He had started encouraging her about three years before that. The discussion, he said, was less about “You need to do this” and more about “How do we maximize your years in retirement?” 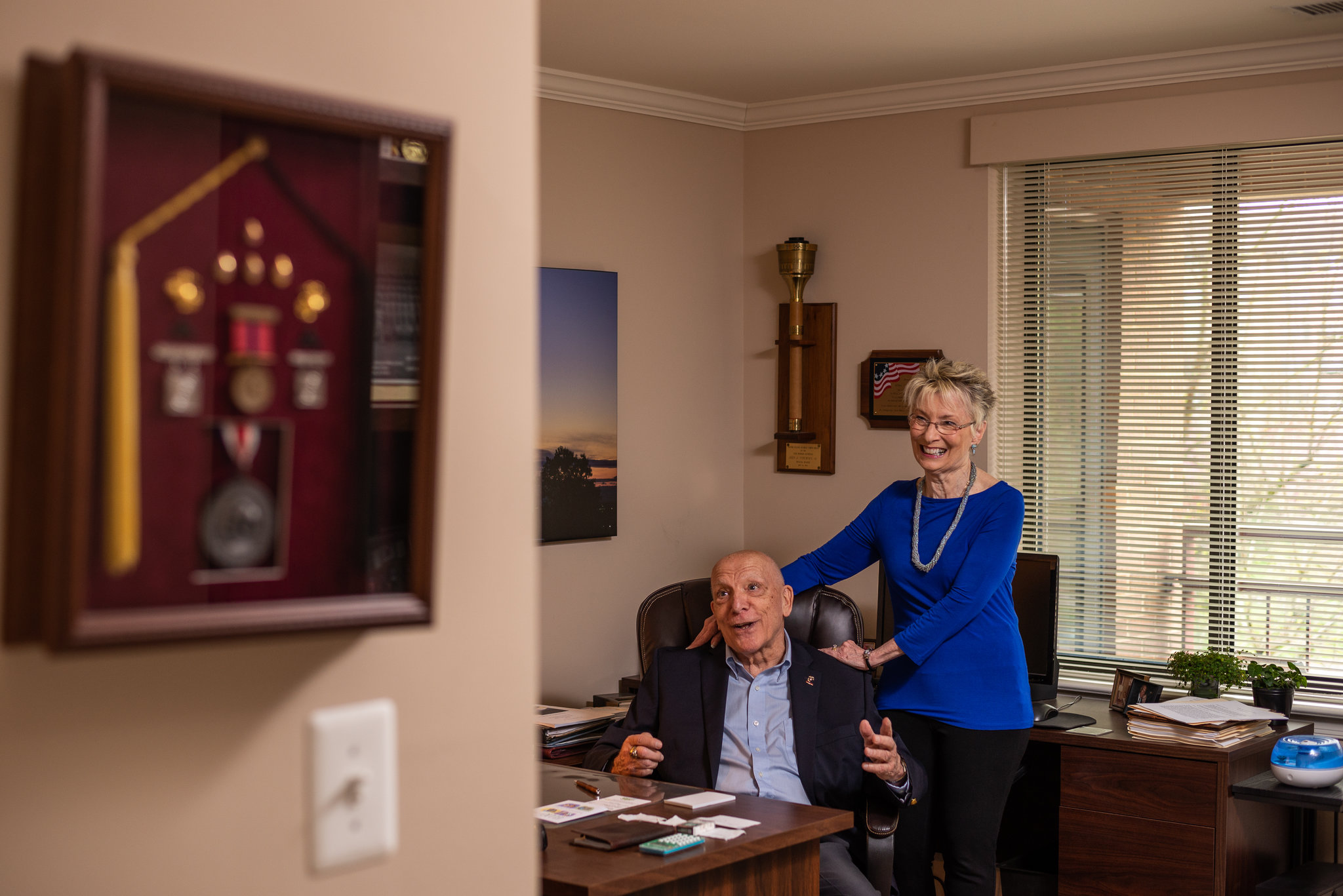 Ms. Strumsky desperately wanted to move to a retirement community. One of her goals: Eliminate the work of maintaining their home. CreditAndrew Mangum for The New York Times

He focused on “really getting her to reflect on her life as she knew it,” he said. “I got her to recognize that the stairs in her house were pretty steep, that the weather had more of an impact on her ability to get out and do things, that she wasn’t pursuing all her hobbies as much anymore because people weren’t driving at night. It ended up being very easy.”

It’s best to start the retirement-home conversation with broad, open-ended questions, said Brad Breeding, founder of myLifeSite.net, a website that helps consumers research retirement communities. “What does peace of mind mean to you in this stage of your life?” he suggested. “What kinds of concerns do you have for your future?”

Let’s say a senior’s No. 1 goal is staying in her home. “O.K., in the next conversation I’ll start to talk about ‘What would we do if you had a fall in your home?’ Or ‘What would happen if you had a stroke?’” Mr. Breeding said.

One way to make retirement communities more attractive is to frame the move as a gift to their children. “It’s really removing the responsibility of caring for the parents, of not having to make frantic, last-minute arrangements if something changes in their health,” said Lesley Sargent, a residency counselor at the Sagewood retirement community in Phoenix.

Part of the problem is that many people hear “retirement community” and think “nursing home.” Today’s typical continuing care retirement community, or C.C.R.C., is a far cry from the sterile nursing-home environment of previous generations. While the communities usually have some hospital-like rooms for people who need more advanced care, most of their residences look and feel like ordinary apartments.

The best way around that objection is to let someone see firsthand. “You can always go for a meal just to experience what it’s like,” said Lindsay Hutter, chief strategy and marketing officer at Goodwin House, a senior living and care organization in Virginia.

The ideal approach: Create a social occasion where the senior you’re trying to convince can dine with friends, or friends of friends. With seniors, Ms. Hutter said, “our observation is that peers have a much greater influence than their children do.”

Some retirement communities let potential residents spend a few nights to see how they like it. Others offer rental programs that let seniors stay longer. Like a lot of C.C.R.C.s, Goodwin House will let nonresidents join a waiting list — known as its “priority club” — that allows them to use its restaurants and participate in activities. If they decide the community is not for them, the $1,000 waiting list fee is refundable.

Continue the full article on The New York Times>